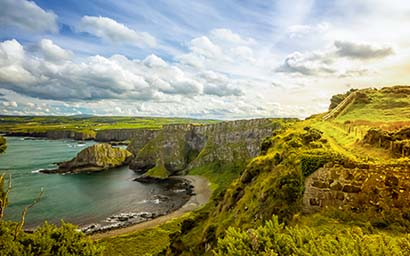 Northern Ireland is pinning its hopes on the fintech sector for the post-Brexit era. Funds Europe examines its prospects.

The constant barrage of Brexit headlines suggests that Northern Ireland is a region on the brink. However the growth of its fintech sector offers some welcome respite.

The start-up and SME tech community has benefited too, from government bodies and private-sector organisations that have sought to develop a fintech networking scene and promote collaboration between start-ups and incumbents in sectors such as financial services and asset management.

Distributed ledger technology and blockchain-related development has proven to be an important area of focus. The region is home to a number of blockchain start-ups, including Belfast-based Bitnet, which Tokyo-based Rakuten recently acquired.

Meanwhile, both PwC and Deloitte are investing in their technology teams in recognition of the region’s blockchain talent. For example, PwC Belfast has the largest group of blockchain specialists in PwC worldwide. The Bank of England is working with PwC Belfast on a proof of concept using distributed ledger technology for payments settlement.

Northern Ireland also has a cluster of companies in governance, risk and compliance technology across a diverse range of sectors including financial, legal and professional services. With customers that include the world’s five largest banks, teams in the region are developing compliance solutions to meet a range of regulations, including the Markets in Financial Instruments Directive (MiFID), the Alternative Investment Fund Managers Directive (AIFMD), the European Market

Examples include MetaCompliance, a provider of automated, cloud-based compliance software, and Arkk Solutions, which has developed proprietary technology for regulatory frameworks such as the Capital Requirements Directive IV and new reporting modules for AIFMD and Solvency II.

Perhaps the greatest fintech focus for Northern Ireland has been cyber security, born out of the 2008 decision to create the UK’s Centre for Secure Information Technologies (CSIT) in Belfast docklands and in conjunction with Queen’s University. Its mission was to help companies commercialise emerging cyber-security technologies and CSIT is now a hub of security verification and authentication technology businesses. It is also a facility where academic researchers and start-ups regularly collaborate with some of the many US firms in the region.

In addition, the province has become a popular location for US cyber-security firms’ international offices. Recent arrivals include WhiteHat Security, Rapid7, Proofpoint, Alert Logic and Black Duck. CSIT is also leading a European project to create security coding that will boost systems’ defences against cyber attacks while ensuring compatibility with the next generation of quantum computers.

Education is a critical component. In a highly competitive cyber-security market, several tech companies have looked overseas for talent, and the cyber-security courses at Queen’s and Ulster universities were designed to entice them to Northern Ireland.

These universities also run a growing number of fintech-related graduate training schemes, both of which have developed state-of-the-art trading room facilities for students, equipped with Bloomberg terminals. The trading room at Queen’s is sponsored by First Derivatives, while the Ulster University facility is sponsored by CME.

Northern Ireland recognises that the ability to supply specialised talent is crucial to establishing a global position in technology. One selling point is its well-educated workforce: 70% of its IT professionals hold degree-level qualifications, a noticeably higher figure than the rest of the UK and the Republic of Ireland.

Moreover, it has one of the youngest populations in Europe, with 53% under the age of 40 and 40% under 29. Its school-leaver results eclipse the UK average too: 77% of its high-school students go on to third-level education and 84% of its students achieved the top three grades in A-level exams, compared with 77% in the UK.

While London’s fintech sector is wary of Brexit, concerned that a hostile immigration policy and tightening of the rules on overseas workers will make attracting talent harder, Northern Ireland’s is bullish, aware that international companies are there for cost-effective and skilled labour (especially in technology) rather than access to the European market.

The province’s cheerleaders highlight rents, quality housing and salaries, pointing out, for example, that its operating costs are up to 30% less than the rest of the UK and Europe. Property costs are 75% lower than London’s and 60% lower than Dublin’s.

Research and development costs are similarly competitive, thanks to tax incentives. Typical salaries in the fintech sector are 40% lower than London’s and 30% lower than Dublin’s, but are higher than the average local salary.

Economic development agency Invest Northern Ireland has been working with tech sectors to encourage links between academia and industry, and to support companies’ efforts to access new markets and new technologies. Earlier this year, it launched its first fintech accelerator, Ignite Northern Ireland.

A rival initiative, Fintech Scotland, was established in 2017 and, in May this year, appointed Deloitte as a strategic partner as part of its expansion plans. But Northern Ireland remains confident that it offers the most convenient gateway to the EU and that UK government support packages, which exist for as long as the investor stays in the region, will continue to set it apart.