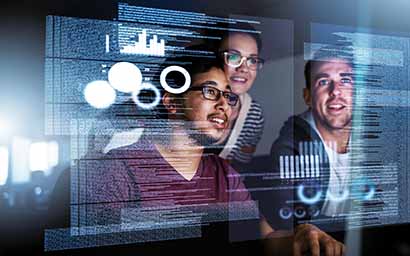 Revolution is commonly a bloody process, delivering a radical departure from established orthodoxies. We should be careful, therefore, about making bold claims that a development in technology will revolutionise an industry sector or a way of working.

When applied to the development of quantum computing, however, this statement may be more than careless hyperbole. It is possible that the introduction of quantum hardware and algorithms will transform the way that financial optimisation and simulation problems are solved within the financial services world.

Standard Chartered has been looking closely at the advances that this discipline may bring to financial services; two years ago, it began a joint project with the Universities Space Research Association (USRA), a Maryland-based non-profit research corporation that organises quantum computing collaboration with external partners through the Quantum Artificial Intelligence Laboratory (QuAIL). This project utilised quantum computing hardware based at the NASA Ames Research Centre in California.

For Alexei Kondratyev, managing director and head of the Data Analytics Group at Standard Chartered, who co-ordinated the bank’s contribution to this project, quantum computing is likely to be the next major development in financial services.

“We can look back to the days before the internet and the development of powerful desktop computers and note how these innovations changed the world,” he says.

“Quantum computing will do the same. This will massively disrupt how computation is done and financial services is highly open to disruption from a high-performance computing perspective. Recognising that an important new technology is on the horizon, it is essential to be prepared and to realise early-mover advantage where we can.”

Problem-solvers
Quantum computers currently belong to two main families, one built around quantum logic gates, and the other built around a ‘quantum annealing’ process (see box ). Quantum annealing computers, particularly those built by US supplier D-Wave, have been available commercially since 2011 and have been deployed quite extensively in a research environment to solve complex optimisation problems. “Gate model” quantum computers are at an earlier stage in their development, but are seeing heavy investment from firms such as IBM, Rigetti and Google. 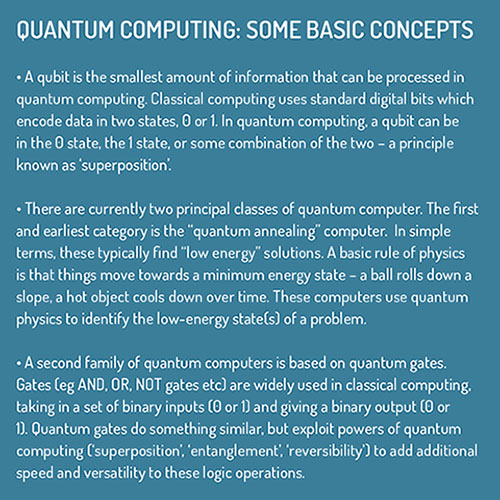 Quantum annealing computers are good at solving complex optimisation problems that are NP-hard on classical computers. Financial services encounter this type of optimisation problem regularly, both in a sell-side and buy-side environment. Monte Carlo simulations are another area where quantum hardware can offer major benefits (see below).

Standard Chartered employed a quantum annealing computer for its first quantum computing project because, at the time of the project launch, these were substantially more developed than gate model computers. “These were powerful enough to solve real-world problems and were a natural choice for us at this time,” explains Kondratyev. “However, our ambition is to run optimisation problems on gate model computers and this will be our next major project in quantum computing, focused on maximum risk in constructed portfolio optimisation.”

Stefan Woerner, global leader at IBM in quantum finance and optimisation, says that his team’s quantum algorithm offers a large speed improvement for solutions involving the Monte Carlo method. “Using Monte Carlo simulations, the risk assessment computation for large portfolios is often an overnight task. In the worst case, the computing time can extend over several days. The quadratic speed-up provided by quantum computing may reduce calculation time from overnight to near real-time, or from days to hours.” Although it may take a several years until the hardware to deliver this speed-up becomes available on the required scale, Woerner believes that the potential impact of this development will be enormous.

Enormous power
IBM researcher Kristan Temme is confident that the enormous processing power extended by quantum computing will enable significant advances in artificial intelligence (AI) and machine learning. IBM is using quantum computers to create new classification mechanisms that can be employed to identify patterns in data that are not discernible to classical computers.

This ability to categorise data accurately can be important, for example, when using AI models to identify a cancerous cell from otherwise healthy tissue in a medical application, or when screening historical financial data for factors that may trigger a financial shock.

“We are still some distance from achieving quantum advantage for machine learning – the point where quantum computers surpass classical computers in performance – because we have been forced to minimise the scope of our research problem based on current hardware capabilities,” says Temme.

The next step is to capture these advances in a live financial services environment. For seven or eight years, quantum annealing computers have provided hardware on which to run meaningful experiments. Within the next three to four years, Kondratyev and his team at Standard Chartered expect to move beyond the experiment phase to a production-level implementation.

Chad Rigetti, chief executive of Rigetti Computing, says that developments in quantum hardware and supporting software mean that quantum computing is now moving close to this tipping point, known as quantum advantage. He identifies three steps that are important in crossing this threshold. One is to deliver more quantum computing power (or ‘qubits’) and lower error rates. A second is to develop better tools for programming quantum computers. And the third to is to provide users with access to hybrid algorithmic models that bring together the strengths of classical and quantum computing.

In September 2018, Rigetti announced the launch of Quantum Cloud Services, a commercially available quantum cloud computing platform that combines quantum hardware with a classical computing infrastructure according to the hybrid model described above. With this, it offers a user interface to the quantum world that supports a box of programming tools known as Forest. This is an important development that is likely to simplify the task of programming in a quantum computing environment.

It is also beefing up the power of its computers, targeting 128-qubit quantum computers and reducing errors rates around the gate design that is a building block for this type of hardware. Qubit gates are highly sensitive to noise from the surrounding environment and the company is applying low-noise control electronics to develop qubits with longer lifetimes and lower error rates.

Do not expect this to be a big-bang transition where all computing functions are migrated to quantum computing overnight. Rather, he suggests, this will occur when organisations identify a series of small gains across the firm and these add up to a relatively sizeable improvement in efficiency.